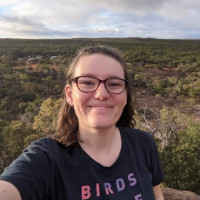 Dr Emma Rehn is our Artist in Residence for the 2022 Pint of Science AU Festival! After completing her PhD palaeofire (studying ancient bushfires), she is now a postdoctoral researcher in archaeology at James Cook University, with the ARC Centre of Excellence for Biodiversity and Heritage.

Her creative flair and fascinating knowledge of ecology are combined in this detailed artwork titled 'Jump in!', which honours Australian flora and fauna along with other scientific endeavours within the microcosm of a Pint glass. 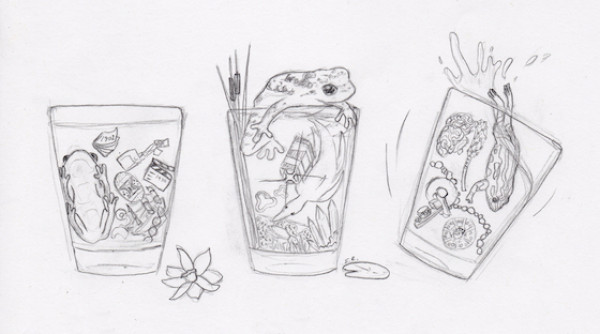 The Australian animals at the forefront of climate change risk are our native frogs. Frogs are indicator species for water quality and wetland health, as they absorb chemicals from air and water through their skin, and they are threatened by a deadly combination of chytrid fungus and climate change.

This work symbolises what we know, what is still left to discover, and what we can act now to save, represented by three frogs:

The mascot of this piece is Misty the armoured mist frog [centre pint glass]. Like myself, she’s a local of the Wet Tropics of Queensland. Little research has been done on the armoured mist frog; we don’t even know the sound of its call.  They are critically endangered and were thought to be extinct until a small population was rediscovered in 2008. Misty’s close relative the mountain mist frog is likely already extinct, but it’s not too late to save the armoured mist frog.

Substantial research has been done and is ongoing on the southern corroboree frog [right pint glass], found in southeast New South Wales. Current conservation programs include captive breeding in NSW, ACT and VIC. Multiple research projects are investigating the genetics and life cycle of southern corroboree frogs, and even developing ways to increase their fertility.

These frogs also symbolise jumping into science, encouraging everyone to participate and get involved with changing our world for the better. The six themes are represented by historical and recent discoveries and innovations in Australian science grouped into three pint glasses (left pint glass: Our Body & Our Society, centre pint glass: Atoms to Galaxies & Planet Earth, right pint glass: Beautiful Mind & Tech Me Out).