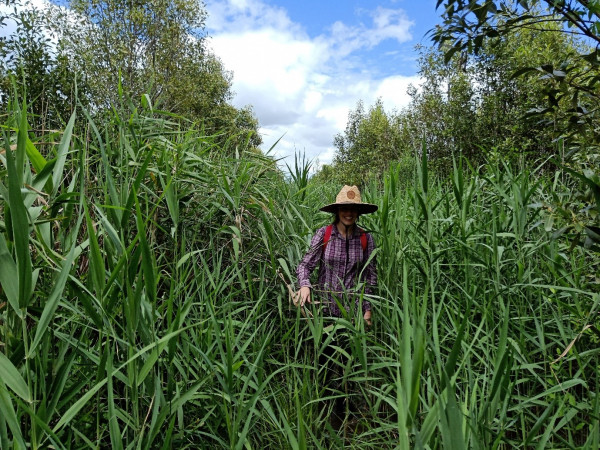 “The water was up to our necks, we were carrying all our possessions overhead… and when we finally got to the site, we sunk in about half a metre of mud.”

Impeded by the relentless whipping of waves during high tide and buoyed by the presence of inquisitive sea turtles and dugongs, spending two hours to traverse half-a-kilometre to a mangrove forest in North Stradbroke Island is all in a day’s work for ecologist and environmental engineer, Dr Alice Twomey.

A postdoctoral research fellow at The University of Queensland, Alice works in a multidisciplinary team to better understand how we can effectively restore and protect coastal ecosystems. Alice’s current research specifically deals with wetlands: ecosystems that provide a number of crucial and far-reaching benefits in coastal areas for humans and the environment.

The importance of coastal wetlands

In addition to providing habitats for fish species that we eat, wetlands act as a buffer region between land and sea. This is especially important during flooding events. As floodwater makes its way to the ocean from areas further inland, the sediment carried with it settles in these wetland regions; effectively being filtered before it reaches the ocean. Similarly, pollutants in run-off from industrialised areas or highways are absorbed by wetlands before entering the ocean. Crucially, wetlands also play a role in combatting the causes and effects of climate change. Like many vegetation-rich areas, wetlands serve as a significant carbon sink; carbon dioxide is absorbed from the air and stored as the biomass of mangroves and other plant life. However, wetlands also have a unique role in overcoming rising sea levels. The mangroves trap sediment and effectively build up the soil layer underneath them, allowing the next generation to grow in higher ground. This ecological phenomenon could be a key element in the sustainability of our coastlines as sea levels continue to rise.

“Mangroves build up elevation by accreting sediment and their own biomass. They’re essentially getting higher. Is that rate faster than sea level rise? If mangroves can beat sea level rise, we’ll have a more sustainable coastline into the future.”

Over the decades, many natural wetlands in Australia have been converted into land suitable for farming. This is primarily achieved through tidal gates - structures that control water flow and prevent the accumulation of salt water inland. The reversal of this transformation has long been recognised by ecologists as an important process for hydrologically restoring coastal wetlands. However, this idea has only recently been integrated into federal land management strategy for reducing carbon emissions. In January of 2022, the Blue Carbon initiative was launched as part of the Emissions Reduction Fund. This initiative provides a financial incentive for landholders who commit to restoring agricultural lands to wetlands.

Researchers such as Alice play a key role in this process. It is difficult to accurately gauge the volume of water on-site and it is uncertain how the water will move when tidal gates are removed. Alice’s expertise in civil engineering combined with her thorough knowledge of wetland environments uniquely positions her to solve this problem. In her current work, she is developing geometric models that will better predict water flow through these regions which will empower landholders and governments alike to achieve safe and sustainable restoration of wetland ecosystems. Alice also works with landholders engaging in the Blue Carbon initiative to ensure their projects succeed.

Where from and where to?

“My background is engineering, but now I spend my days with turtles, dugongs and crocodiles. Science provides an alternate pathway in a more traditional career. Most engineers in consultancies sit at a desk, I’ve been there and done that. When you go into academia or research, you can really broaden what you do for a job.”

Straight after high school, Alice studied a Bachelor of Environmental Engineering (Honours) at Griffith University, and worked at a consultancy as a Water Resources Engineer. Driven by a desire to work on solutions for environmental problems, she left industry and returned to academia and completed her PhD at The University of Queensland.

Like many scientists, Alice spends a lot of her week in front of computer, whether it’s preparing a grant application or paper, or writing code. However, she also gets the opportunity to work in the field in diverse parts of the world amongst mangroves, sea grasses, saltmarshes, and… perhaps more dangerous marine life.

“I was taking seagrass cores in Sanya, China. We just had to jump in the water, and we were surrounded by what looked like small sharks. I didn’t speak the language, and none of the volunteers spoke English… so we were all just panicking for four hours and hoping for the best!” 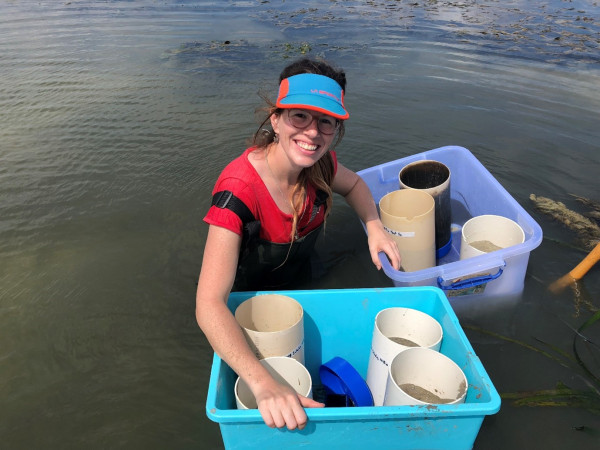 Alice appreciates that she’s had the opportunity to develop a diverse skillset over the years, and the constant exposure and drive to learn new skills. Alice hopes that her knowledge and expertise will go towards writing technical reports and guidelines for wetland restoration with other top scientists around Australia.

“As a researcher, I might not be able to change the whole world. But I hope to use my research to develop best practice guidelines for designing and restoring coastal wetlands. One wetland at a time, I’ll see how much of the world I can get through.”