“It’s a vast field of science and enables us to build a whole story, just from an animal’s poo!”

What animals come to mind when you think of Australia? Kangaroos, emus, … and koalas.

Conservational ecologists Dr Romane Cristescu and Dr Riana Gardiner aim to understand what drives koala population decline across Queensland and New South Wales and how to address these causes. Some factors that influence the decline are disease, loss of habitat from human disturbances, and changes in the climate – such as bushfires and heavy rainfall. Understanding why a particular population is struggling is critical to designing solutions to maximise conservation.

In contrast to koala sightseeing locations where one can simply scan a few branches to spot a tree-hugging bear, koalas in their natural habitat protect themselves from predators by making themselves less visible. This is a main challenge in studying them.

Romane, Riana, and their team are developing and testing better non-invasive methods to study koalas. This includes training detection dogs and using drones with thermal cameras and tracking devices to determine koala density and signs of their presence, namely scats or poo.

“We talk about poo on a daily basis, we actually get excited about it.” - Riana

“The glamourous image of ecologists spending lots of time observing wonderful wildlife is often not quite what we do!” - Romane

“Alzheimer’s disease drug development failure rates are as high as 99.6%” 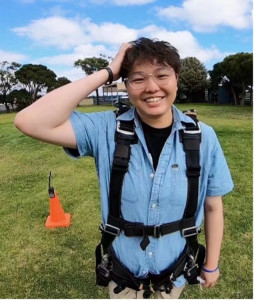 July 2013, Shanghai - “Despite the dryness of the bright sun, the air was cool the moment I stepped into Shanghai ZhongShan hospital. Patients, families - adults, children, adolescents - sat, waiting for their turn, so orderly as if in a play, their actions scripted. Three weeks since I started my internship, I gained a new perspective of what happens from the other side of the hospital: stress in the operation room, the precision of every incision, and the close-knit teamwork that saved countless lives. Being so close to life, how can one not be interested in the mystery of our bodies?”

Alzheimer’s disease (AD) is a well-known disorder that causes the brain to shrink, leading to dementia, a decline in ability to think, remember, and function independently. Since there are currently no known cures or ways to treat AD and drug development has not been met with much success, it is necessary to develop early detection techniques to hinder the onset of symptoms.

These techniques rely on the detection of neurodegenerative biomarkers, molecules produced by the body that are indicative of disease. Qingqing’s research aims to develop a colorimetric sensor for rapid and simple detection of Aβ (1-42) biomarkers, one of the biomarkers characteristic of AD. She will synthesise a metal-organic framework (MOF) based sensor on which biomarkers will adsorb onto. The chemical reaction between the biomarkers and a catalyst will generate qualitative coloured readout. Since the amount of biomarkers present in AD patients varies by the individual. The challenge is to set up a parameter on the concentration range for the detection.

“Parasitism rates in damselflies are affected by climatic variation”

Climate change is a strong force that impacts host-parasite interactions, potentially leading to the extinction of host species. Greater intensity of parasitism, measured by the number of parasites leeching off a host, and greater prevalence, measured by the number of organisms in a population infected by a parasite, are costs to the host species’ ability to survive and reproduce. This prevalence and intensity varies within and across species due to factors such as sex, developmental stage, immunity, resistance, and the environment. Studies on parasitism in vertebrates reveal that the cost of parasitism is consistently greater in males than in females. However, in insects, the pattern is less obvious.

“Understanding how the prevalence and impact of parasitism varies across populations and in different climatic conditions will help identify insects that are vulnerable under the changing climate.” - Shatabdi

As her PhD journey continues, Shatabdi intends to better understand how the host and parasite interact and evolve with the changing climate and address how the interaction is shaped by behavioural, nutritional, and immunological variations.